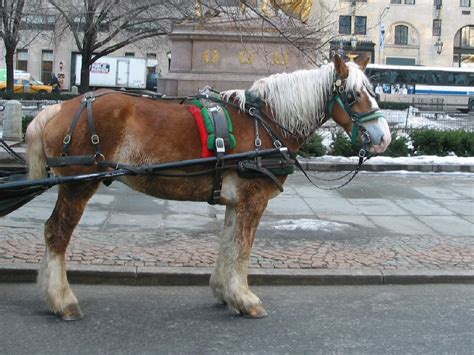 Chicago will finally end its carriage horse livery business on January 1st, after a long battle with animal rights groups and other animal protagonists.

Other cities around the United States have done the same, as well as other countries around the globe. The use of animals for entertainment and amusement is beginning to grate on more people’s nerves than just the die-hard animal activists all across the globe. Animals are now deemed sentient beings in New Zealand. It seems once one country declares a fact to be true, other countries fall in line as if the fact had been self-evident all along. Here’s to hoping other countries fall in line quickly so as to protect more of our animal friends.

Horses have been pulling carriages since time out of mind. After the advent of the car, they soon lost their use as a mode of transportation. Harnessing a horse up to a carriage and taking a spin soon became a novelty. This is today seen in the carriage horse rides around Central Park in New York City and the recently ended carriage rides up and down the Magnificent Mile in Chicago.

Unfortunately, people treated horses down through the ages much like they treat their cars today. Some take very good care of their cars. Others are apt to abandon them at the side of the road and let the city government take care of their problem. When cars replaced horses, it was a great day for horses. No longer were they used to pull unbearably heavy loads up unimaginably steep hills, and worse.

The horse got a break. Excepting the novelty carriage horses standing at the ready in cities all around the world. This is thankfully coming to an end.

Click here to read more about the battle to end carriage rides in Chicago.